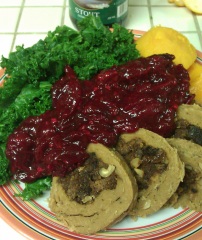 Here’s what I had last week for Thanksgiving dinner.

The sides are: a roasted golden nugget squash, steamed kale, and a tart cranberry sauce (with only a quarter of the recipe sugar). I like kale a lot, and I really like cranberry sauce. Cranberry sauce on vegetables makes me think I should start making lots of chutneys for future vegetable dinners.

The centerpiece is a seitan ‘roast.’ This was modified from Isa’s sausage recipe. I always make her sausage recipe with many more beans (1 or 1.5 cups) and less vital wheat gluten. For vegetable broth, I like Better than Bouillon No-Beef Base. I use tomato paste instead of oil, and I toss whatever spices I happen to have (at the moment, I’m using an Italian spice mix that was on sale for 99 cents). I tend to not measure ingredients (a habit I will try to change), so I just tossed everything together with enough gluten until it seemed right.

The stuffing is based on pumpernickel bread. I dried cubes of Fire Island Vollkornbrot in the oven. On the stovetop, I sauteed some diced onions (with water, not oil, as per McDougall cooking methods). I soaked some raisins in hot water, then mixed in a scoop of low-sodium vegetable broth mix from the bulk aisle, and added the onions, then mixed in the bread cubes and some chopped hazelnuts.

I divided the sausage mix into roughly two halves, and used the larger half to wrap four sausages for later. The smaller half I stretched into a circle and rolled around the stuffing I’d prepared, then wrapped the whole thing in foil. I steamed the ‘roast’ and the sausages together, and just left the roast in longer, until it felt right. The leftover roast was actually even better on Friday, after a night in the fridge. I sliced it into medallions and heated them in a frying pan, and they came out great. Next time I want seitan roast for a special occasion, I’ll try to make it a day ahead so it can rest first. I bet it would reheat really well in the oven, unwrapped, with some vegetable broth for braising.

So, Thanksgiving 2012: all plant-based, and no-added-fat (apart from the hazelnuts). Very successful, in my opinion.